Kanye West’s ascent into the realm of high fashion is one that has been both bolstered and undermined by the controversy it is imbued with. Regardless of the criticism his at-times outlandish choices have earned him, West’s audacious touch and keen attention to detail have turned the multihyphenate into a formidable fixture in today’s fashion landscape. From his early days as an intern at Fendi alongside Off-White founder Virgil Abloh in 2009, to the birth of his eponymous Yeezy brand in 2015, West’s journey from rapper to fashion mogul is a crash course in reinvention.

A testimony to the symbiotic relationship between his musical career and his apparel endeavors, West’s fashion saga began with a number of unassuming fashion raps sprinkled throughout his chart-topping discography long before his creative directorial debut. In addition to his countless name-drops of luxury fashion houses like Balmain and Moschino, West famously gave a nod to former Céline creative director Phoebe Philo on his 2010 track “Dark Fantasy,” when he rapped, “my chick in that new Phoebe Philo,” only to then be bestowed the honor of presenting her with the CFDA International Designer of the Year Award the following year. 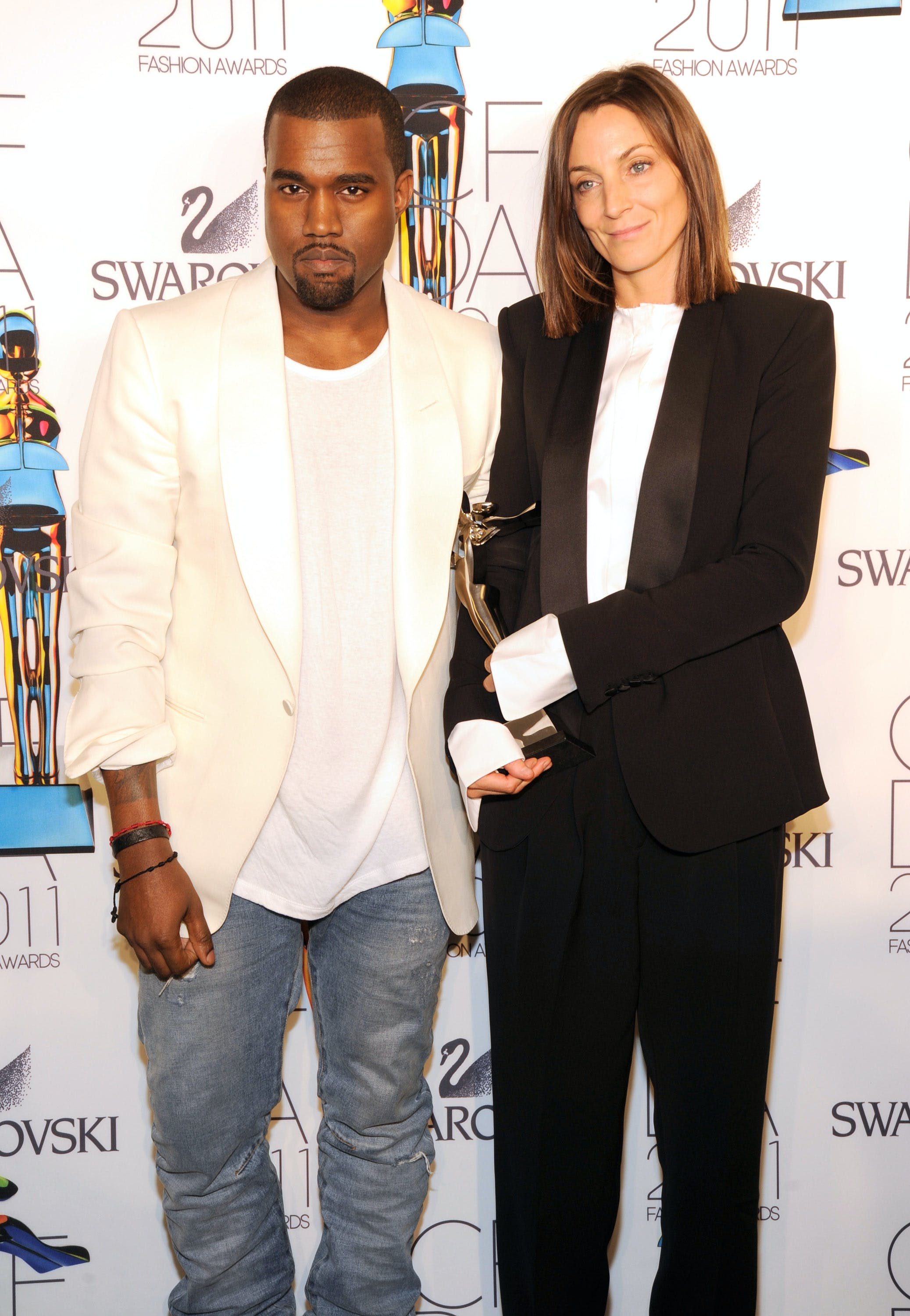 Before his entry to the upper echelon of fashion, West flirted with two clothing brand ideas in the mid-aughts, including Mascotte By K West, which was ultimately scrapped and never saw the light of day, and Pastelle. Enlisting the creative help of industry notables such as Virgil Abloh and Kim Jones (who was Louis Vuitton’s men’s artistic director at the time), West intended for Pastelle to debut in 2009.

However, the launch came to a screeching halt following West’s interruption of Taylor Swift’s acceptance speech at the 2009 VMAs, which marked something of a fall from grace for the College Dropout rapper. Soon enough, the brand faded into obscurity—much to the dismay of today’s resellers, who are probably still holding onto the hope that there's a box of unreleased, Pastelle-embossed samples sitting in a warehouse somewhere, just waiting for them to get their hands on them.

In October 2011, West re-emerged from the shadows, debuting his Dw by Kanye West collection at Paris Fashion Week in honor of his late mother, Donda West, who passed away in 2007. The inaugural show, which featured snakeskin prints, skintight leather pants, and an abundance of fur, was not received well by critics, who noted the ill-fitting appearance of many of the garments being paraded down the runway and felt that overall, West was simply trying too hard. 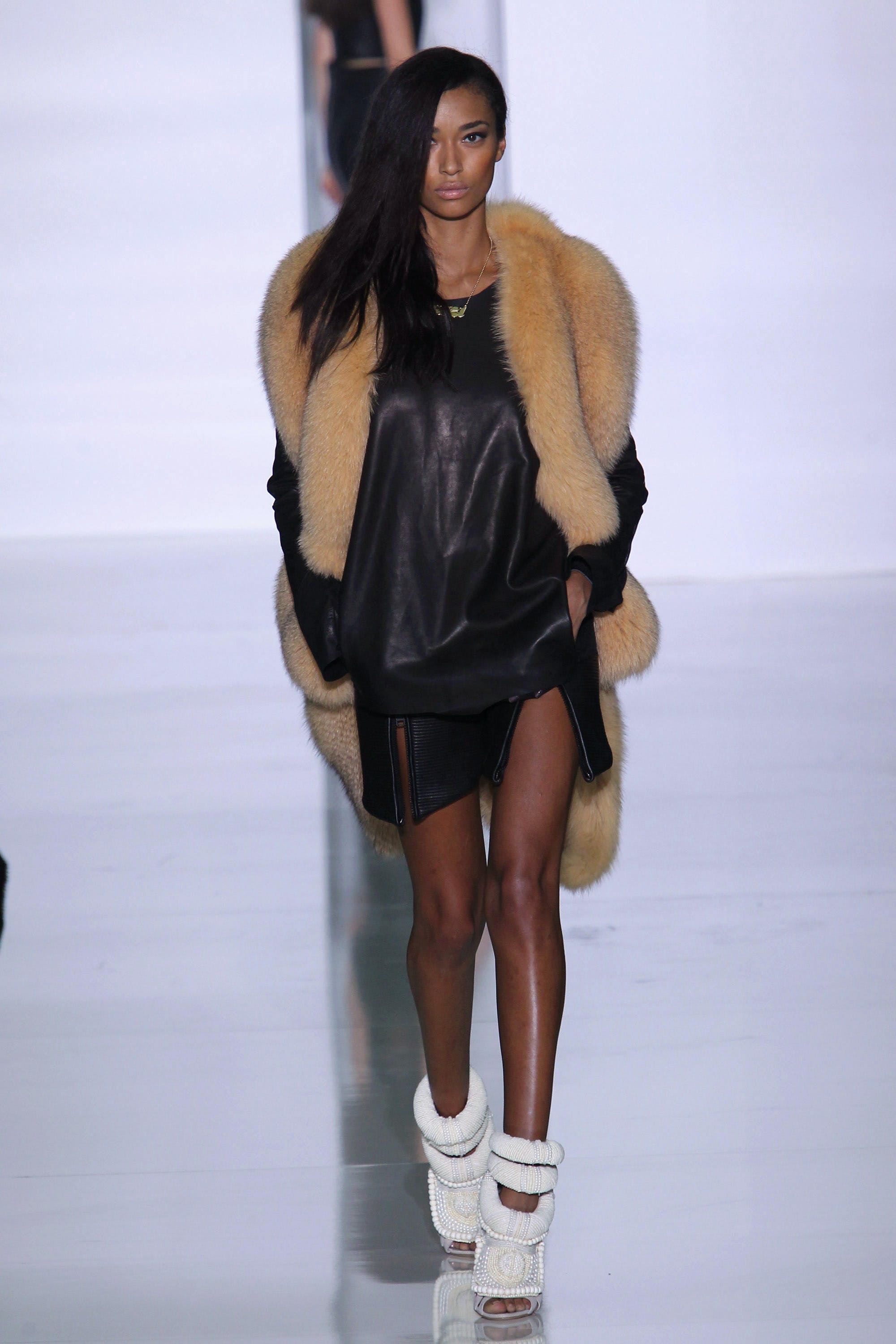 Feeling slighted by the negative feedback, West banned critics from previewing his Fall/Winter 2012 collection, although most of them ended up finding it to be a marked improvement from his debut, anyways. With no financial backing from a larger company, Dw by Kanye West shut down after producing its second collection, and so began West’s retreat from maximalism in favor of neutral palettes and muted themes.

Enter the Yeezy brand. Although Yeezy is produced in partnership with Adidas, the brand’s journey technically began with Nike back in 2012, when rumors of a Red October Yeezy 2 trainer in collaboration with the sneaker giant began swarming social media. Glimpses of the all-red sneaker with gray laces and gold-laced tips built excitement among sneakerheads and Kanye fans alike, establishing Ye as a trailblazer in hype culture even before it was cool. Dissatisfied with his allotted royalties and the shoes’ continuously delayed release, however, West severed ties with Nike before the sneakers were dropped, switching over to Adidas in 2013 and formally debuting the Yeezy brand in 2015.

After months of speculation, Yeezy Season 1 was unveiled to the world in February 2015 during New York Fashion Week. The heavily-anticipated collaboration between the rapper-slash-designer and Adidas Originals was composed of military-inspired garments and showcased a color palette incorporating mainly nudes, army greens, and navy blues. West recruited the help of contemporary performance artist Vanessa Beecroft (who also happened to have been the creative lead for Kanye’s iconic 2010 “Runaway” music video) for the presentation, which featured a diverse cast of expressionless, unmoving models and had vaguely dystopian undertones.

Not only was the show hailed for its inventiveness, but the collection was a landmark occasion in Yeezy history, birthing the Yeezy Boost 750 and introducing the first low-top Yeezy 350, which soon became a decade-defining sneaker. Upon being asked about his inspiration behind the collection in a lengthy post-show interview with the now-defunct Style.com, West responded, “You guys know my influences. I’ve got four influences and it’s written all over the face...You see Raf Simons right there, you see Helmut, you see Margiela, you see Vanessa (Beecroft), you see Katharine Hamnett. It’s blatantly right there.” 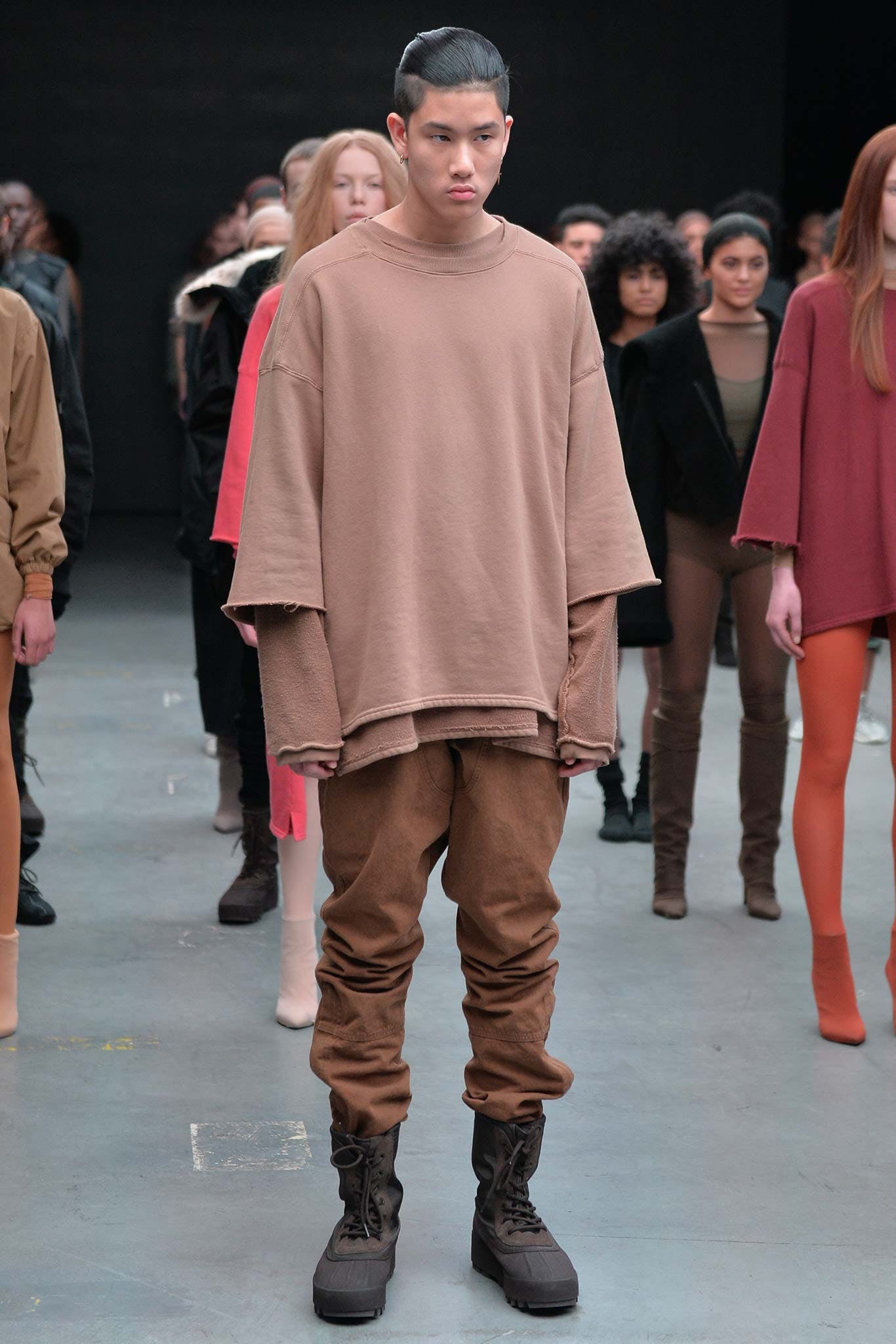 Come Yeezy Season 2, West would double down on the militia themes, this time adding bomber jackets and brighter hues into the mix. Since launching Yeezy, West has repeatedly used the brand as a means to break boundaries in the fashion world, making progress that even his most controversial philosophical abstractions cannot diminish. Yeezy Season 3, which took place at Madison Square Garden, also served as an album release party for West’s 2016 album, The Life of Pablo, and was a concert-esque, star-studded spectacle that is still lauded for its innovative delivery to this day. 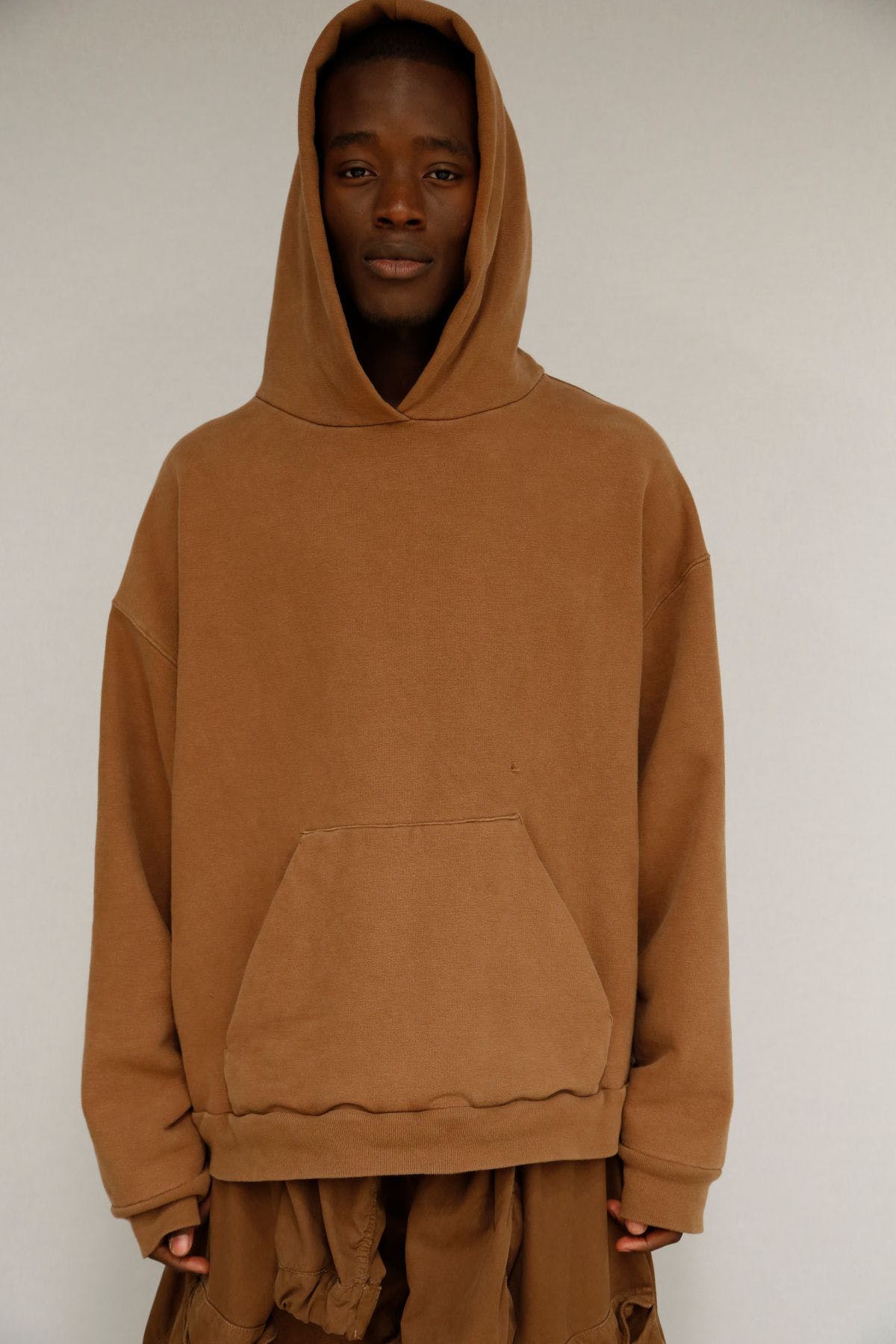 The road has not been all uphill, however—in the six years since its inception, the Yeezy brand has been met with its fair share of backlash. When West made unsuspecting attendees of his Season 4 show wait hours for the presentation to begin, guests were already feeling vexed by the time models began fumbling their way down the runway (literally—many of them were unable to walk in their stiletto-heeled shoes, resulting in traffic jams and even causing model and five-time Yeezy vet Amina Blue to simply give up and remove hers mid-walk).

The rollout for Yeezy Season 6, on the other hand, made headlines (as in, more than usual) because West opted to premiere the collection via social media campaign rather than at a high-profile venue during fashion week. Harnessing the social media prowess of his then-wife Kim Kardashian and other affluent influencers (including Kardashian's friend and former boss, Paris Hilton), West's collection was revealed bit-by-bit on Instagram by way of paparazzi-style shots of his selected influencers wearing the collection's pieces while out and about. West's decision to skip out on traditional fashion week festivities that season demonstrated that even upon being embraced by the world of high fashion, West still unflinchingly rejected the norms it pushed upon him.

Yeezy Seasons 7 and 8 brought forth waist-length and cropped puffers, flared leggings and neutral-toned, woolen bralettes (as well as a spur-of-the-moment singing/rapping/whatarethoseing debut by North West at the Season 8 Paris Fashion Week presentation). Sneak peeks of Season 9 indicate that the upcoming collection may even pivot into tech accessories (West has been adamant in his praise of tech and engineering tycoon Elon Musk in recent years, so it was really only a matter of time until he made a leap into that world himself).

All in all, even amidst the extensive critical acclaim the Yeezy brand has accumulated over the years, West's unrelenting madcap antics over the years have allowed him to protect his outsider status throughout his success. 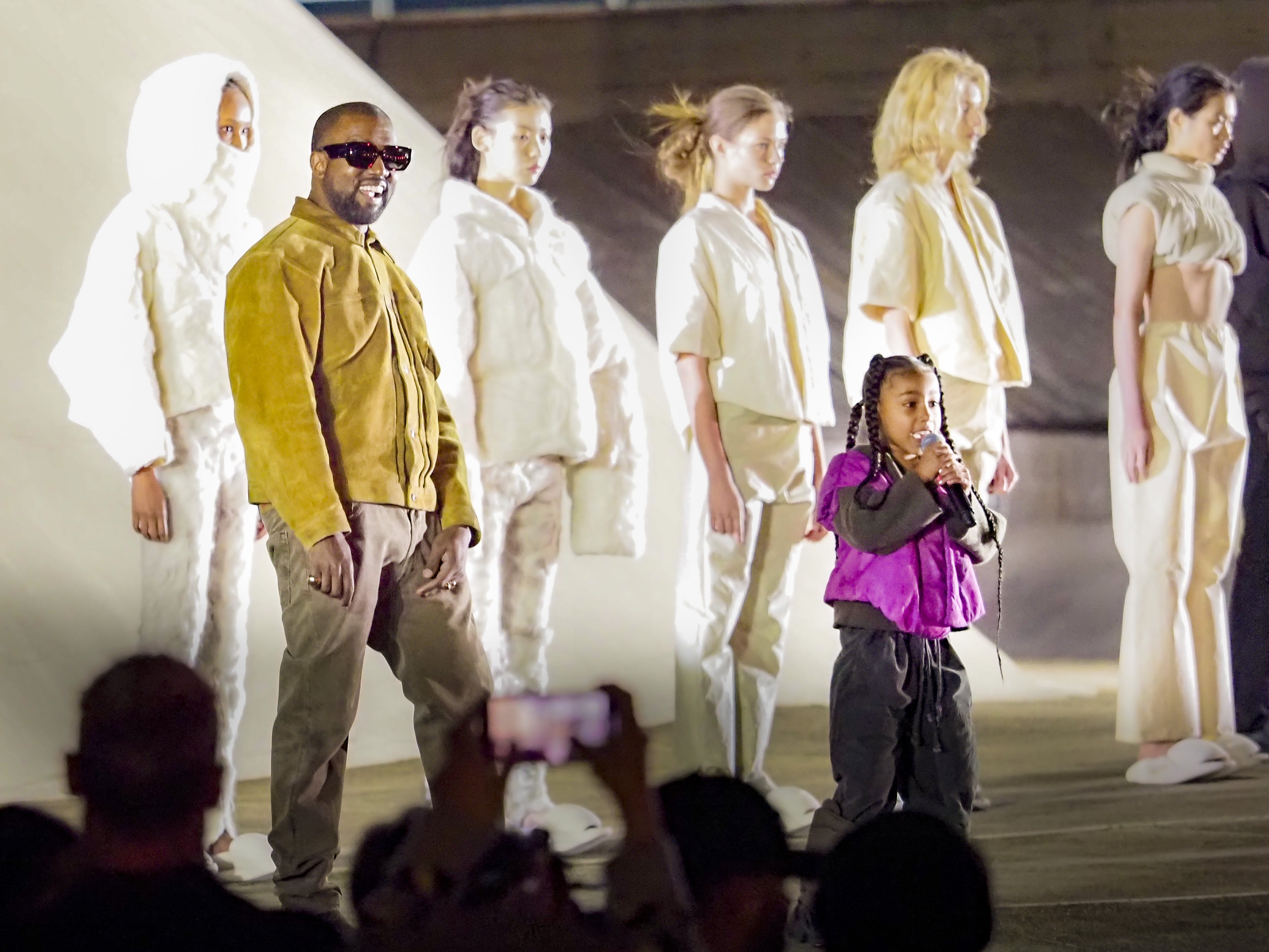 This June, the long-awaited Yeezy X Gap collaboration will be released—a full-circle moment for West seeing as in addition to learning the ropes at Fendi, he also gained insight into the fashion business through an unofficial stint at Gap in 2009, where he worked under Gap designer Patrick Robinson. The first piece from the collection unveils today, a bright blue round jacket, which is now on pre-order and will ship in the fall.  Based on other previews of the collection, the line will look akin to a typical Yeezy line, featuring lots of neutral colors, puffer jackets, oversized hoodies, and even khakis (it is a Gap collaboration, after all).

Having inked a 10-year collaboration deal, the upcoming collection is being led by 25-year-old, Nigerian-British designer Mowalola Ogunlesi, who has designed custom pieces in years past for distinguished celebrities ranging from Drake to Naomi Campbell. If this collabration is able to do for Gap what Yeezy did for Adidas upon the onset of their partnership in 2015, Gap could be on the brink of its very own awe-inspiring comeback story.

Marcelo Burlon Opens a Pop Up

Sniff out this six new men's fragrances – all with a connection to the elements that inspired them and with a common purpose: to redefine masculinity
04.04.2017 by Filment Ho

A sincere blend – of hard and soft, tailoring and sportswear, quirk and tradition – made Fendi’s latest men’s collection an enticingly hopeful one.
02.01.2017 by Gordon Ng

Recommended posts for you

The Let’s Dance capsule collection unveils a short film and a dance challenge for the brand’s community
06.25.2021 by Adelynn Wong

Exclusive: Inside the Greek Artistry of Dior's Cruise 2022 Collection

Find out how delicate pastel-coloured drawings and traditional Greek embroideries made their way into Dior’s exquisite collection.
06.24.2021 by Adelynn Wong

This is Burberry's most disruptive collection yet

The aesthetic of its creative director Riccardo Tisci is more present than ever in the new Spring 2022 menswear collection.
06.24.2021 by Lorena Meouchi (Mexico)

When Alex Riviére offers a glimpse into her strategically constructed wardrobe, one should take the opportunity because it could and probably will be the last one.
06.24.2021 by Beatrice Tourou (Austria)

Why can't celebrities stop racing to start their own cosmetic brand?

On the eve of rumours that Harry Style and Cardi B are also launching their own cosmetic brands, do you remember how many times a star has decided to enter the beauty market? And have you ever wondered what motivates the stars to embark on the cosmetic business — one after another — so strongly?
06.24.2021 by Bùi Phương Linh (Vietnam)

Kristen Stewart takes us behind the scenes of Chanel's latest campaign

Ecologist Dr Tessa Hempson tells us about the impacts that Covid-19 has had on the planet — both good and bad.
06.24.2021 by Hillary Kang

The French beauty brand continues its commitment to sustainability.
06.23.2021 by Adelynn Wong